« Previous Next » This post is #10 in the The World of Star Driver pool.

Like George, he lives in the dorm and is a second year student. His hobby is tinkering with his bike; he even commutes to school on it. A member of Fifth Company “Filament,” as Speed Kid he’s involved with Wako’s kidnapping with Benio and the others.
Cybody Alephist

The Cybody belonging to Fifth Company, “Filament.” Its signature move is “Buffalo Crash” in which it charges with its giant body, and it is Takuto’s first opponent.
Cybody Tetrioht

A Cybody, like Alephist, that belongs to Fifth Company, “Filament.” Part of its body can rotate at high speeds and transform, and it can fly through the sky at terrifying speeds.
Honda George / Raging Bull
CV: Takagi Shun

A second year student who lives in the same dorm as Takuto. He’s a member of the boxing club and his thoroughly trained body is very impressive. He’s a member of Fifth Company “Filament,” led by Benio, and he plans Wako’s kidnapping with her.
Dai Takashi / Banker
CV: Akabane Kenji

A timid boy who looks after Kanako’s daily needs along with Simone. A member of the Fourth Company, “Adult Bank,” he has another face as Banker, and pilots the Cybody Tzadikt.
Simone Aragon / Secretary
CV: Taketatsu Ayana

Another member of the “Adult Bank,” she’s in charge of taking care of Kanako’s daily necessities—a girl who plays an active role despite being the “secretary.” She’s always doing things with Kanako, she’s extremely devoted, but the complicated circumstances underneath all that are...?
Cybody Tzadikt

A Cybody belonging to the Glittering Crux Brigade’s Fourth Company, “Adult Bank.” It carries the Star Sword, Améthyste, and makes sport of its enemies with its beautiful, dance-like fencing.
“Even though she’s the wife of a world-leading foundation’s president, whenever she sits behind Takuto, she’s always saying lewd things to herself (lol)” (Enokido).

“So, when Takuto hears it, he gets all flustered, but, really everyone in class is leaning in to hear what she’s saying! (lol)” (Igarashi)
Watanabe Kanako / President
CV: Niina Ayano

A classmate of Takuto’s who’s already married even though she’s a high school student. Her husband is Leon Watanabe, the head of the gigantic international financial clique, the Grand Tonnerre Foundation. She has such a seductive and voluptuous sense about her that she doesn’t seem 15. Of the upper echelons of the Glittering Crux Brigade, she alone is called “President.” She leads the Fourth Company, “Adult Bank.”
Fourth Company
Adult Bank 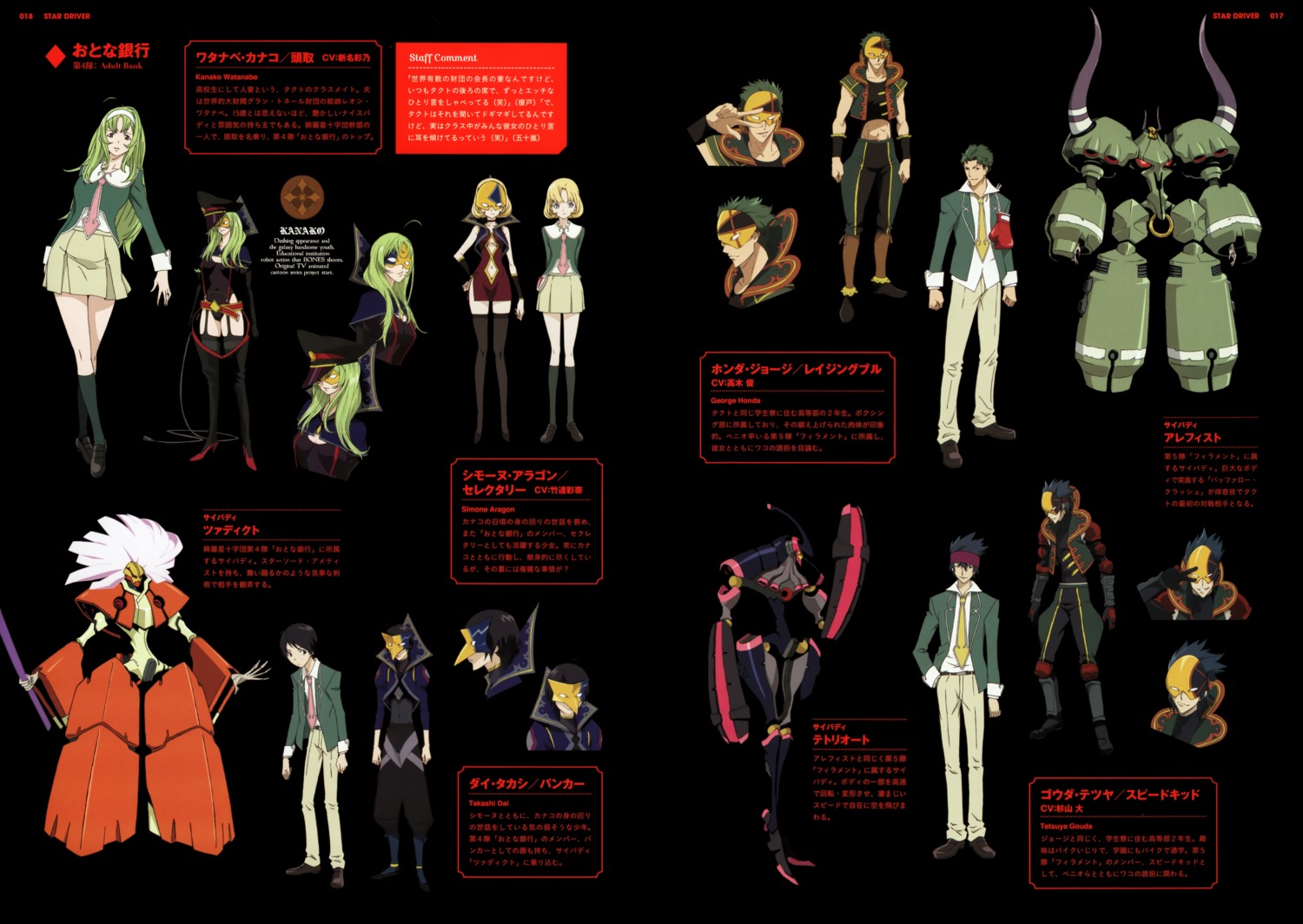