« Previous Next » This post is #7 in the The World of Star Driver pool.

A giant robot that looks like a knight, runs on the ground and dances in the air—a Cybody. Let’s try to get a little closer to the secrets of this mysterious robot.
The Secret of the Cybodies
The Cybercasket from which Cybodies in Phase Two can be remotely operated. The Glittering Crux Brigade’s Drivers pilot the Cybodies from these coffins.
The 20 or so Cybodies sleeping underground

There are ancient ruins below Southern Cross Island. About 20 Cybodies are sleeping there. There are two types among them, the female “shrine maiden type” and the male “warrior type”. Furthermore, the abilities of the “warrior types” are sealed by the “shrine maiden types.” Also, there’s a gigantic Cybody that doesn’t fit into the aforementioned classifications, “The King’s Cybody,” presently so damaged that it cannot move.
The power of the sealed Cybodies and the 5 phases

The Cybody’s power is sealed in advance by the four shrine maiden types. The Glittering Crux Brigade calls the stages of the seal “phases,” distinguishing from the completely sealed “Phase One” through “Phase Five.” When each of the first four stage seals is released, the phase moves to a higher number, and the restraints on its power are lifted. When they reach the final phase, “Phase Five,” it’s said that the Cybody can operate outside of Zero Time.
Cybody
Tauburn

The Cybody that started up when Takuto apprivoised it. It can shoot a beam of energy collected in its chest called “Tau Galaxy Beam,” and it has two Star Swords called “Émeraude” and “Saphir.”
Apprivoising and Zero Time

Cybodies that can’t move, as if they were normal stone figures, can be activated when certain people apprivoise (form a bond with) them. At that time, they materialize in the special alternate dimension called “Zero Time” (conversely, outside of “Zero Time” Cybodies can’t move). The aim of the Glittering Crux Brigade is to take the Cybodies out of Zero Time.
The brilliant sunlight rains down on Southern Cross Island. But, there’s a big secret hidden deep under the ground of this island. Sleeping in the ancient underground ruins are 20 giant stone figures—these figures, called Cybodies, will awaken from their long sleep if a capable person apprivoises (forms a bond with) them.

But, they can’t use their abilities freely since they are sealed by the four female Cybodies, called “shrine maiden types.” Phase Two Cybodies can only be operated remotely from Cybercaskets, and are also restricted to operating within the special alternate dimension called “Zero Time.”

But, “Tauburn,” the Cybody Takuto pilots, is the only machine for which those restrictions are partly lifted. Takuto doesn’t use a Cybercasket, but pilots Tauburn directly, and can show its power off completely (this stage is called “Phase Three”). Takuto is called the “Galactic Pretty Boy" because of that astonishing power. 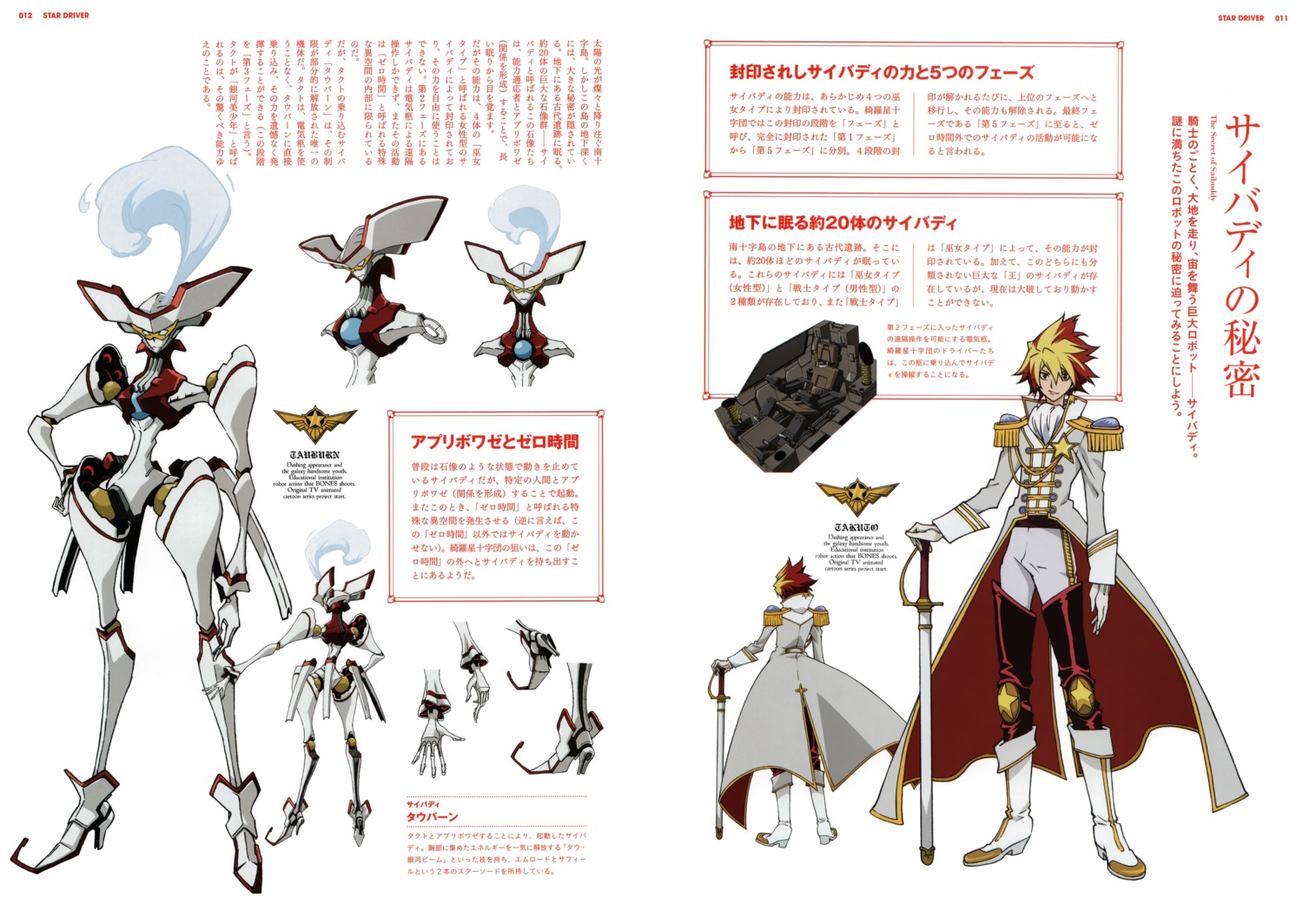